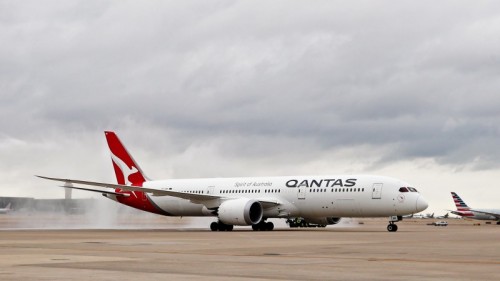 Qantas will operate three non-stop return services per week between Sydney and DFW on a Boeing 787-9 Dreamliner, reconnecting Australia and North Texas as the flying kangaroo rebuilds its U.S. network.

“We’re pleased to welcome Qantas back to DFW Airport, re-establishing an important link between North Texas and Australia,” said John Ackerman, executive vice president of global strategy and development for DFW Airport. “The resumption of service by Qantas demonstrates a significant commitment to the Dallas Fort Worth region, and our customers will benefit from the convenience it provides.”

Qantas International CEO Andrew David said the airline is excited to be returning to Dallas Fort Worth and so too are passengers, as bookings on the Australia to DFW route more than doubled in the days after the Australian Government announced tourists would be welcome back from February 21.

“We know Americans are keen to travel again to and rediscover all that Australia has to offer, with the U.S. currently performing as one of the strongest inbound markets across the Qantas network.

“Dallas Fort Worth has always been a key route for Qantas and the service will play an important part in enticing American visitors to Australia for the first time in nearly two years. It will complement Qantas’ existing flights to Los Angeles, providing business and leisure travellers with a network of connecting flights for travel within the U.S.”

Dallas Fort Worth International (DFW) Airport is the most connected airport in the world. Centered between owner cities Dallas and Fort Worth, Texas, DFW Airport also serves as a major job generator for the North Texas region by connecting people through business and leisure travel. For more information, visit the DFW website or download the DFW Mobile App for iOS and Android devices.